Hurrah my card made it into the Top Picks!

I've been playing with Distress Oxide inks lately.  The combinations are never-ending as are the incredible patterns.  Sometimes I pull out the bright colours and sometimes it's the more subtle, neutral tones which appeal.  Well, I had been playing with the more neutral Fossilized Amber, Peeled Paint and Vintage Photo with some awesome results.  I put the pieces of Glossy paper with which I had played, thinking they would be good for a future project.  Little did I know that the future project would come along so quickly.

Having visited the Inkspirational Challenge, I saw that my card from a couple of weeks ago had been among the Top Picks.  After doing a short but sincere "happy dance", I looked at their current challenge and immediately thought of those designs on my Glossy paper. 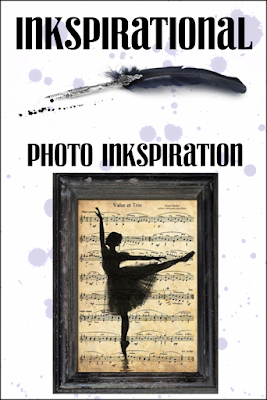 I also immediately thought of one of my favourite stamp sets, Beautiful You.  And so I went to work.  Because of the colours in my freestyle design, I chose the retired Baked Brown Sugar cardstock as my base.  I followed that up with a thin layer of So Saffron and then added another thin layer of Basic Black.  Those colours were perfect as the "frame" around the Glossy paper design.

I wanted musical notes on my paper but I wanted them to be very subtle.  And so I took the Sheet Music background stamp and just inked a centre portion using the Fossilized Amber.  After stamping that on the Glossy paper, I decided not to use my heat gun on it or even let it dry completely.  Instead, I used a Kleenex to wipe the stamped musical notes from the paper.  The result was a definite but subtle image of the notes in a slightly amber tone.

Following that, I stamped the image of the dancing lady using Basic Black pigment ink.  It showed up beautifully against the design on the paper.  I also stamped the sentiment from the same set, using the same ink, in the lower right corner. 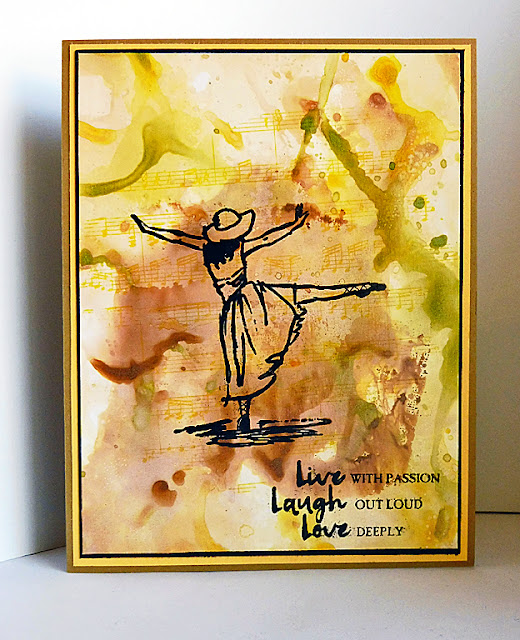 I hope you'll check out the other great designs at the Inkspirational Challenge.