For the Seize the Birthday Challenge there is always a choice.  One can choose their suggestion which they call "the toppings" or one can choose to go one's own way and create an "anything goes" card.  The only hitch either way is that it has to be a birthday card. 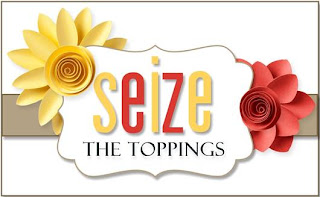 Our "Toppings" option this time is...
"Ocean Colors"
(Blue, Green and or Aqua)

I had been wanting an excuse to play with a few of the Distress Oxide inks which I had managed to find and buy.  Among them, the Broken China and Peeled Paint seemed like the closest to the "topping" colours.  To those I added a neutral, the Vintage Photo.  I love the way these Oxide inks separate into new colours and shades and also the way they layer without becoming muddy, as long as you dry the colours in between each addition. 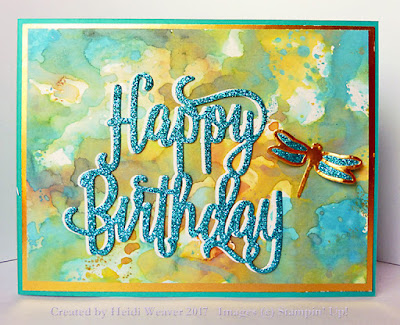 Once I had created my background, I checked out my cardstock to see what would be the most complimentary colours.  In the end I used Bermuda Bay as my base followed by a layer of Gold Foil.  Then I attached my background piece.  For my huge "Happy Birthday" greeting, I die-cut the Bermuda Bay Glimmer paper but backed it with a layer of die-cut white to make it pop.  As an embellishment, I finished up by adding a little dragonfly die-cut from Gold Foil with the negative portion of the wings filled with Bermuda Bay Glimmer paper.

Overall this was an easy card to create and makes me want to play with those Oxide inks even more.

This card is entered into the Seize the Birthday Challenge. 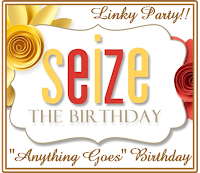 I've also entered my card into the Tuesday Throwdown Challenge since it is all about punches and/or dies.

Sale-a-Bration! Need I say more? It's on and this year's freebies which you can choose with a qualified order, are AWESOME!
Of course the new Occasions Catalogue is AWESOME as well. Want one? Just contact me and I'll be happy to get one to you as well as a Sale-a-Bration brochure.