Stamps are wonderfully versatile.  They can transfer images and sentiments to a host of materials other than paper.  You just have to choose your ink.  The regular classic ink pads, for example, are fine for card-making or adding special touches to your scrapbooking.  Sometimes, however, you want to go beyond stamping on paper.

My ink of choice for stamping on non-paper materials such as plastic, glass, candles, wood and rocks, for example, is StazOn.  Yes, it has quite a strong odor and yes, it is virtually impossible to remove from your fingers if you get messy, but it does its job very effectively.  I was amazed when I used it to decorate some white candles (more on that in another blog entry).  Of course I had to test its abilities further.  My sister likes to have decorated rocks sitting among her plant display.  What could be nicer, I asked myself, than to use one of the gorgeous images from my Stampin' Up! stamps on a rock?

For the first rock on I tried the StazOn, I chose a polished river rock.  The lovely smooth surface just seemed to cry out for some decoration and I was pleased to supply it.  I used one of my retired stamps on that one and, overall, I was quite pleased with the effect.

The highly polished surface did not faze the StazOn.  The stamped image was quite clear and, once dry, remained permanent.  Colouring the image, however, was not as easy.  The Stampin' Write markers are water-based and it took many layers of dabbing to colour the image.  There are still spots where the ink simply would not stick.  I knew that covering the image with Crystal Effects would make it look brighter and better as well as help it to become permanent but I also knew that the colour that had taken so much work to place on the image would probably run if I brushed Crystal Effects over it.  So I sprayed the painted rock surface with hairspray, let it dry, and then sprayed it again.  After that I covered the image with Crystal Effects and was quite happy with the final result.

Of course I had to try the technique out on a found rock.  On my next trip to the river, while the dog wandered happily along the shore examining sundry interesting scents, I wandered along looking for the perfect rock.  My primary criteria was that it be flat along at least one side.

Once I found my rock, I cleaned it thoroughly at home.  It takes a while for a rock to dry since it is porous, so I waited a few days before going on to the next step, which was to stamp it with an image from that beautiful Christmas stamp set, Beautiful Season.  The bird sitting among the holly was my chosen image. 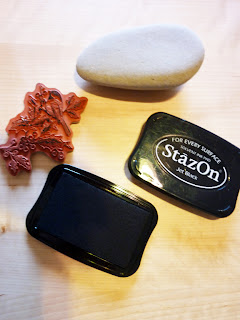 As you can see in this image, the rock was relatively flat but not perfectly and so I chose to use my stamp unmounted.  By using it this way I knew I could massage the image onto the rock and curve it into its shape, retaining the full stamped image.  Of course you have to be careful not to move the stamp at all during the process, but it doesn't actually try to move on a rock's surface the way it would on a polished surface. 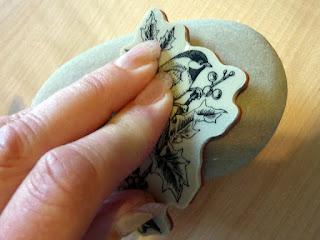 By using the stamp in this manner, I could also contour the stamp around the bottom of the rock, having the image continue past the straight top surface of the rock. 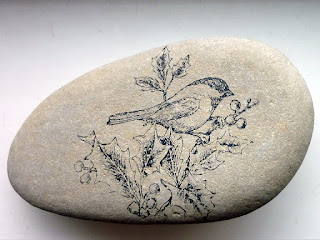 My finished stamping left a good image on the rock's surface.  All the lines were in place and would allow for good colouring.  I left an area free to the top left of the image where I planned to stamp a sentiment after working on the bird and holly image.

Colouring on the natural river rock was far easier than colouring on the polished river rock.  The Stampin' Markers worked beautifully.  I had to go over each colour twice to ensure even colouring, but overall, I was very happy with the finished results. 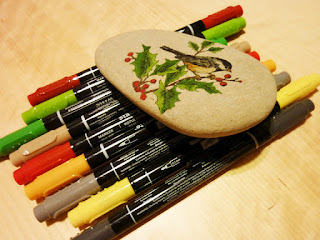 Because the Stampin' Markers are water-based and because the rock is porous, I chose to spray the surface with hairspray after colouring the bird and holly.  Then I used the sentiment from the same stamp set, using only the words "bright and beautiful", and stamped that with StazOn into the clear area at the top left.

Even though the StazOn is waterproof and permanent, I sprayed the whole surface one last time with hairspray and then, about a half-hour later, making sure everything was dry, poured a small pool of  Crystal Effects in the centre of the image and used a flat brush to drag it over the entire image.  Because of the imperfections of the rock, some spots ended up with slightly deeper coverage, but the important thing was to make sure the Crystal Effects actually covered all portions of the image and the sentiment. 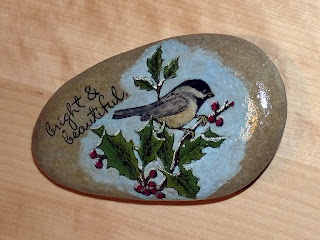 It took about three hours before I trusted that the rock was perfectly dry.  I'd rather err on the side of caution than get a fingerprint on a tacky area.  The finished rock is really gorgeous.  I'll definitely be doing this again with another image.  Since my sister loves elephants, it may very well be the image from the "You're Amazing" stamp set.
Posted by Heidi Weaver at Saturday, October 06, 2012

Sale-a-Bration! Need I say more? It's on and this year's freebies which you can choose with a qualified order, are AWESOME!
Of course the new Occasions Catalogue is AWESOME as well. Want one? Just contact me and I'll be happy to get one to you as well as a Sale-a-Bration brochure.