I have to confess that when I initially saw the Curvy Keepsake Box Die I was unimpressed.  How often, I asked myself, would I honestly use that?  I've come to eat my words.  My goodness, what a lot of fun it is, to use that framelit!  The sky is the limit.  There is nothing you can't create with this little tool, until your imagination runs dry.  Well---when that happens, there is always Pinterest, right?

The theme of our Watercooler Challenge this week is to CASE Pinterest.  The acronym, CASE, stands for "copy and share everything".  Pinterest is the treasure box of shared projects.  I had decided to find something on the site that gave me a new idea for the Curvy Keepsake Box Die.  Hours later, there were still some projects I hadn't seen but my crossing eyes and numb fingers suggested that, perhaps, I had done enough searching.

My CASE from Pinterest is an adorable little turkey which was created by the very talented Darla Watson who posted her version on her blog on August 31st.  Subsequently she posted the darling turkey on Pinterest.  And that's where I found it. 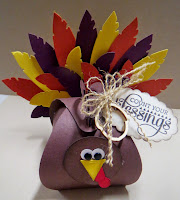 For my version of the turkey, I've used Baked Brown Sugar cardstock for the Curvy Keepsake Box.  This will be the body of the turkey.  I'll also be gluing the head and the tail to this box.  Once I cut the pieces with the die, I stamped them with Baked Brown Sugar ink using the flower from the Blooming With Kindness stamp set.  I thought it would be nice to have a bit of texture to suggest feathers.

For the head, I took my 1 1/4" Circle Punch and cut a circle from a piece of Baked Brown Sugar.  For the beak, I used my Pennant Builder Punch to cut a piece of Pumpkin Pie cardstock (cut to the appropriate length with my snips).  After cutting two white circles using my Owl Builder Punch, I added Black Candy Dots for the pupils.  For the wattle, I did what Darla had done and used the little Heart Punch, cut it in half, and glued it back together, but longer. 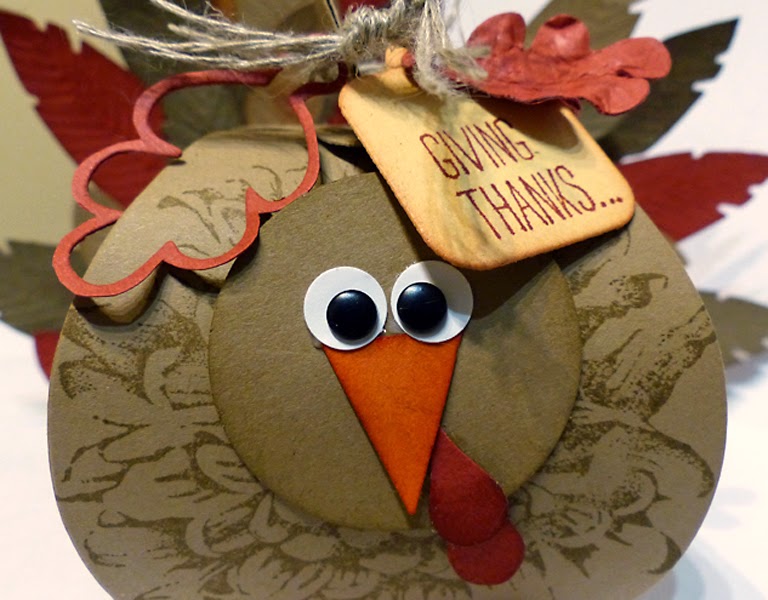 Luckily Stampin' Up! added two feather Framelits this year and they were awesome for cutting out cardstock for the tail feathers.  I cut some from Cajun Craze, Baked Brown Sugar, and Soft Suede with the small feather framelit and then more from the same colours using the large feather framelit.  In all I made a total of 20 feathers for the tail. 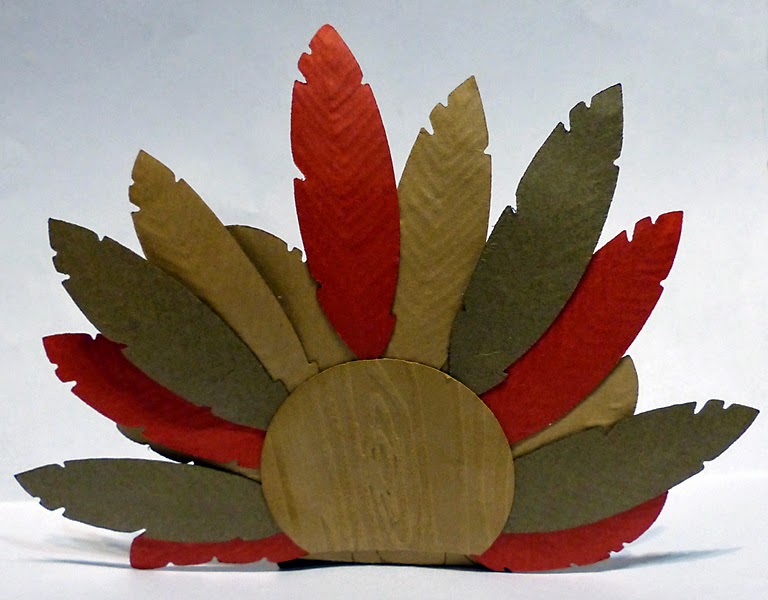 Before putting the tail together, I used my scoring tool to add feather detail to the die-cuts.  All those score lines also made the feathers curve slightly which was a bonus because I wanted the tail to be a bit curved. 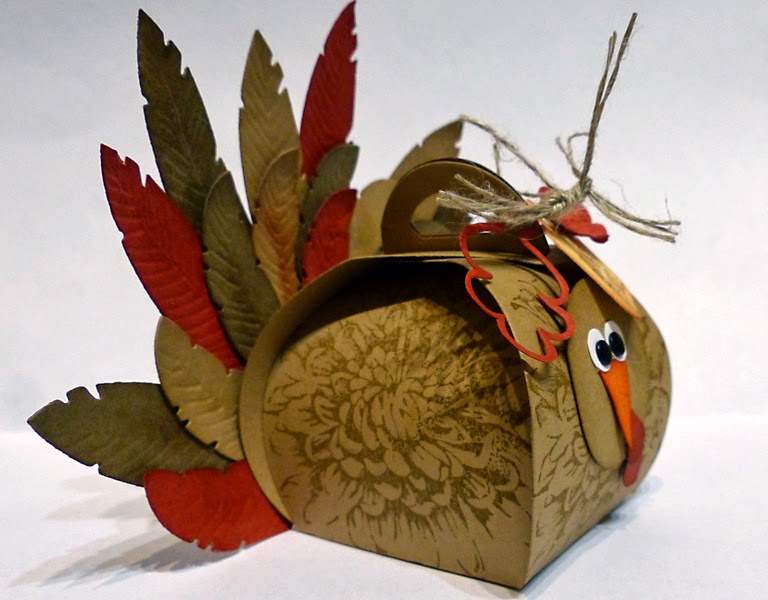 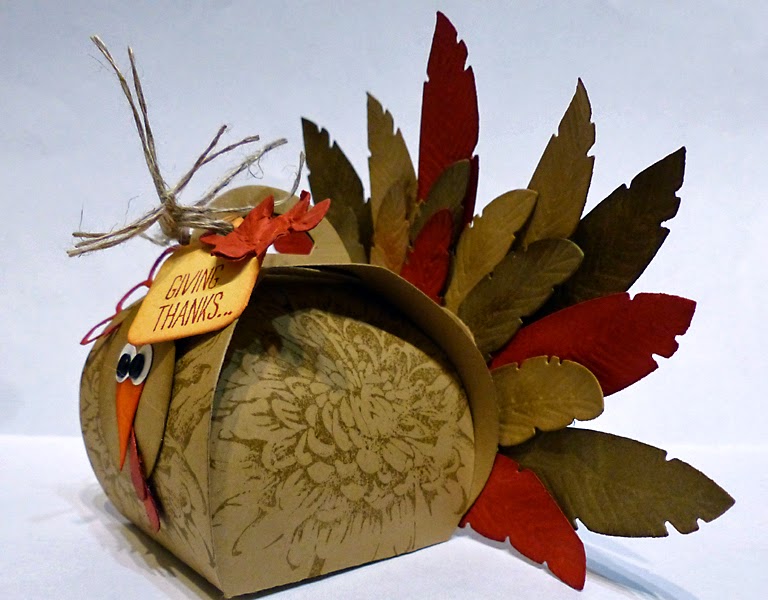 Once the turkey was completely assembled, I used the small oak leaf framelit from the Fun Fall Framelits dies to cut out a piece of Cajun Craze.  The part that was a leaf, I scored and then scrunched to give it texture while the negative portion, I cut around to have a leaf outline.  The sentiment is from the Making Spirits Bright stamp set. 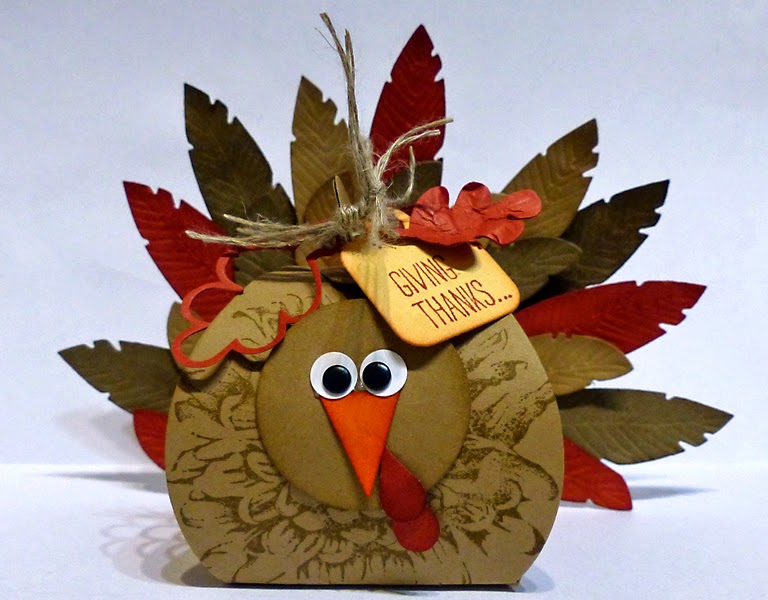 For more projects which are CASEd from Pinterest, check out our Watercooler Challenges Blog.

For more projects that have a Thanksgiving theme and showcase twine, check out the Clear it Out Challenge Blog.
Posted by Heidi Weaver at Sunday, October 19, 2014