*Thrilled that this card is an Artist Pick at Hand Stamped Sentiments!*

When I saw the sketch challenge at Hand Stamped Sentiments, I knew I would enter a card in the challenge.  It's a simple sketch, which is always a great way to add a lot of imagination. 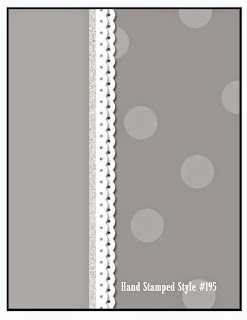 I've been making a lot of Hallowe'en cards lately and therefore I decided I would love the change of pace of a Christmas Card.  All the stores have already stocked up their shelves with Christmas decorations, after all.  I'm just waiting for the first Christmas Carol to play on their sound systems.

But making Christmas cards is NOT jumping the gun.  After all, you have to get that stash put together somehow so that you have enough to send out to your list of friends and acquaintances, right?

For my card I decided to use some of that wonderful All is Calm Specialty Design Series Paper.  The pattern I chose had a mixture of Whisper White, Soft Sky and Lost Lagoon and that pulled all the rest of my colours together.  I chose to make my base in Naturals White and then added a layer of Lost Lagoon.  For the left side I used the piece of All is Calm paper.  For the right side I decided on Soft Sky and proceeded to stamp it using Lost Lagoon ink and images from the White Christmas stamp set.

Above the trees that I had stamped, I punched out stars using my new Confetti Stars punch.  I had to punch the top from each side to get the entire width filled with stars.  Then I cut a small piece of Silver Foil and adhered it behind the punched out stars so that they would appear to be silver.  As a special touch I punched out a Silver Foil star and used a Dimensional to place it among the confetti stars.  That gave a focal point at which the little stamped snowman appeared to be gazing.  I coloured the snowman with my Signo White ballpoint pen and added some white to the birches with the pen as well.  Then I used my Stampin' Markers to colour his carrot nose, scarf and hat.

With both sides adhered to the Lost Lagoon layer, I had to decide what to do about the decorative border between the two sides.  That's where the All is Calm Designer Washi Tape came to mind.  With a strip of the striped silver on one side and the Lost Lagoon snowflake pattern on the other, I knew the card was almost complete.  And so I glued a line of the snowflakes from the Frosted Sequin Embellishments down the centre of the two Washi tapes.  Since I don't like those little holes in the sequins, I covered them with the smallest of the Rhinestones.

For my sentiment I used the Believe from the hostess Good Greetings stamp set.  As you can see, I heat embossed it using my Silver embossing powder.  The silver compliments the other silvers on the card so nicely, doesn't it? 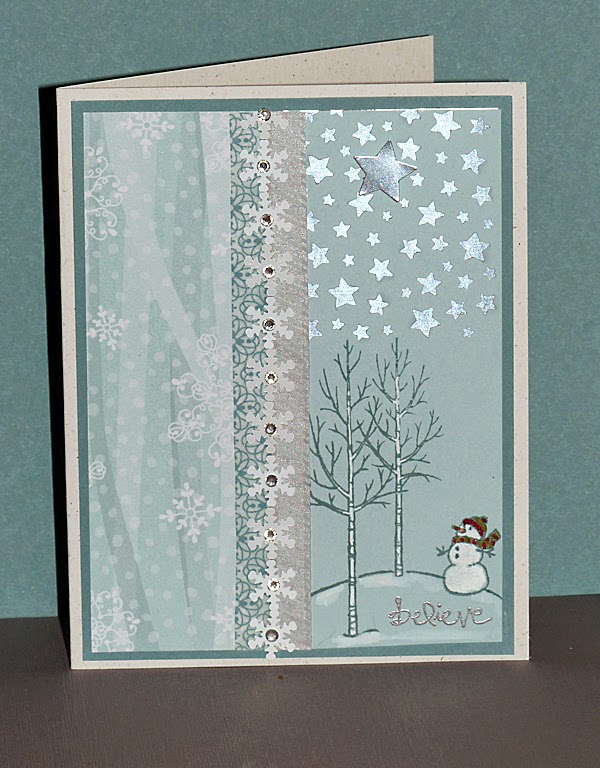 For more cards using this sketch, check out the Hand Stamped Sentiments challenge.