SMILE --- two challenges: a colour and a sketch!

That sweet single stamp, A Little Smile, is such fun to use.  Not only can it be the theme of the entire card but it can also be used in parts simply by inking only portions.  That's what I've done with this card.  Because I wanted to use the stamp but because of the sketch there was only a small rectangle in which it could be used, I had to get creative.  I'm glad that I did because it opens a whole lot of possibilities with that stamp that I hadn't considered before.

The sketch that I followed is from the Sunday Stamps Challenge: 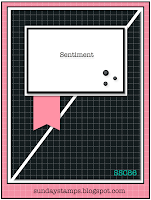 But I wanted to use the colours from the Stampin' Royalty Challenge for the card:

Since I had also decided to use the A Little Smile stamp, I felt almost as if I had painted myself into a corner.  But I do like challenges and was determined to make this work.

For the smaller rectangle I used a base of Naturals White, then a layer of Soft Sky and finally a layer of Whisper White that I had stamped using a portion of the A Little Smile stamp.  I stopped partway up the poles each hedgehog held to have the image fit the rectangle.  Then I stamped the "SMILE" from the stamp onto another bit of Whisper White using Blackberry Bliss ink.  I cut around that to make a banner, sponged the perimeter with Soft Sky ink and then attached it on Dimensionals to appear as if it was attached to the poles.

I coloured the hedgehogs with my Sahara Sand Stampin' Marker and the flowers with my Soft Sky and Blackberry Bliss Stampin' Markers.  Then I attached the smaller rectangle to the rest of the card with Dimensionals.   To finish up I added a small banner in Soft Sky with a heart punched into it and also three Rhinestones which I first coloured using the darkest of my Rich Razzleberry Blendabilities (because the darkest colour is almost identical to the Blackberry Bliss). 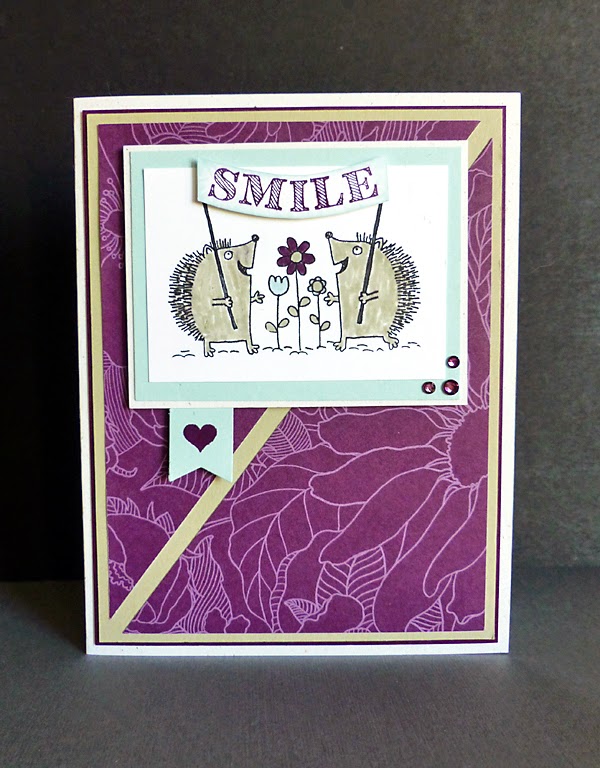 For more cards using these colours, check out Stampin' Royalty.