The new Fringe Scissors that Stampin' Up! offers this year are a lot of fun.  You can use them to make some amazing flowers and, of course, grass.  There are also layers of various fringes and a variety of different ways to put them all together.  So I wanted to do something different.  That's not easy when so many people are coming up with so many ideas.

I decided to make a card for a "tween" girl.  You know, that age when you're not a child any longer but you haven't quite made it into the teens?  Well, I know a number of them and they love glitz and glamour.  The card I made has that in spades.

I began with my second largest Oval Framelit and cut a folded piece of Blushing Bride cardstock so that the top remained hinged.  Then I cut a 1 1/2" piece of Basic Black cardstock and began cutting that with my Fringe Scissors.  Once I had cut the entire length (about 4"), I snipped the piece in half and then shaped the fringe so that one end had longer fringes than the other.  Then I used my Bone Folder to curl the fringe and finally used my Tombo glue to adhere the shaped fringe in a curve on each half of the oval.  Once that was dry I set small rhinestones along the top of the "lashes".

That was okay but something was lacking---hair.  So I took another single oval cut with the same framelit from Hello Honey cardstock.  Along one length I used the Fringe Scissors and made bangs.  I curled them slightly with my Bone Folder and then tied a "hairband" of Cherry Cobbler Seam Binding Ribbon in a bow and adhered that to the "hair".  Finally I glued the blonde hair onto the pink face. 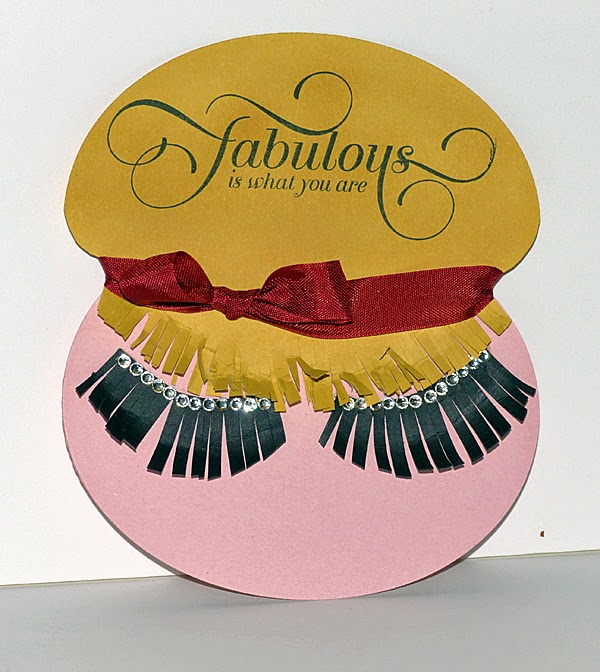 The final touch is the sentiment from the Million & One stamp set, stamped in Black Memento ink across the top of the hair.

For more cards that are part of this challenge, go to Watercooler Challenges.