A friend of mine approached me yesterday.  She wanted me to make a card for her to give to her mother.  She'll be going to the Netherlands in another couple of weeks and really wanted a special card.  You see, this is her goodbye visit.  Her mother is losing her battle with cancer.

I felt both honoured and panicked by the request.  Honoured because my friend obviously loves my work enough.  Panicked because this is a card that means so much to her and will mean so much to her mother.  The criteria for the card were that her mother loves animals and flowers.  Then this morning she added that it would be wonderful if the card could have a Canadian theme.  And she also gave me the sentiment she wanted, in Dutch.

I really wasn't fazed by any of the criteria except for one.  The Canadian theme had me stymied.  I have no Beaver stamp and really didn't want to settle for a maple leaf.  Then I thought of my Walk in the Wild stamp set and I knew I would use the moose stamp.  I know, I know---moose are not only indigenous to Canada.  They are, however, frequently used as a type of Canadian "mascot" and that would have to be it for my "Canadian content".

I wanted the card to be special and so I worked on a different style than normal.  I decided to make a square twisted easel card measuring 5 1/4" x 5 1/4".   I also decided that I would make a scene comprised of the Lovely as a Tree stamp, moose stamp, and bull-rushes from the Wetlands stamp set.  That, of course, meant making a mask of the moose so that I could stamp the trees without stamping on my moose.  The stamping took some time.

To complete the scene, I drew in some details freehand using my Project Life 01 journalling pen.  I used that because it is waterproof and fade-proof.  I extended the grasses beside the moose, creating a shoreline.  Then I turned my paper and sketched in a "reflection" of the grasses.

I did all the colouring using my Blendabilities.  I have to say that I probably couldn't have gotten the degree of shading or detail without those Blendabilities.  They really work well together, even from colour to colour.  I even coloured a "reflection" of the moose and then coloured over that with the blue and it really did look like a reflection in water once the alcohol in the inks fully evaporated and the true colours set.  The sky, however, was done using my Marina Mist ink refill and Aqua Painter.

For my base cardstock I used the Naturals White.  Then a layer of Marina Mist and then the painted Whisper White for which I made a frame using my Square framelits and Early Espresso cardstock.

I decided to add Lupines to the left and bottom border of the card and that was made possible by the stamp in the Forever Florals stamp set.  Stamping and colouring took some time but nothing compared to the fussy-cutting required to cut those flowers out.  But the end result was worth it when I used glue and Dimensionals to put them in place.

I cut 8 simple flowers using my Filter Paper and Flower Frenzy Bigz L die.  I coloured 4 using the lightest of the Night of Navy Blendabilities and 4 using the medium of the Night of Navy Blendabilities.  Then I pierced them all and put them onto an Antique Brad, alternating colours.   For the inside of the card and also to make the "stop" to hold the easel in place, I layered Early Espresso and then Marina Mist (cut with the scalloped square framelit).  Then I mounted the brad and flower to one corner of the layers and adhered them to the base cardstock, making sure that the flower "stop" was in the right position to hold up the easel or front of the card. 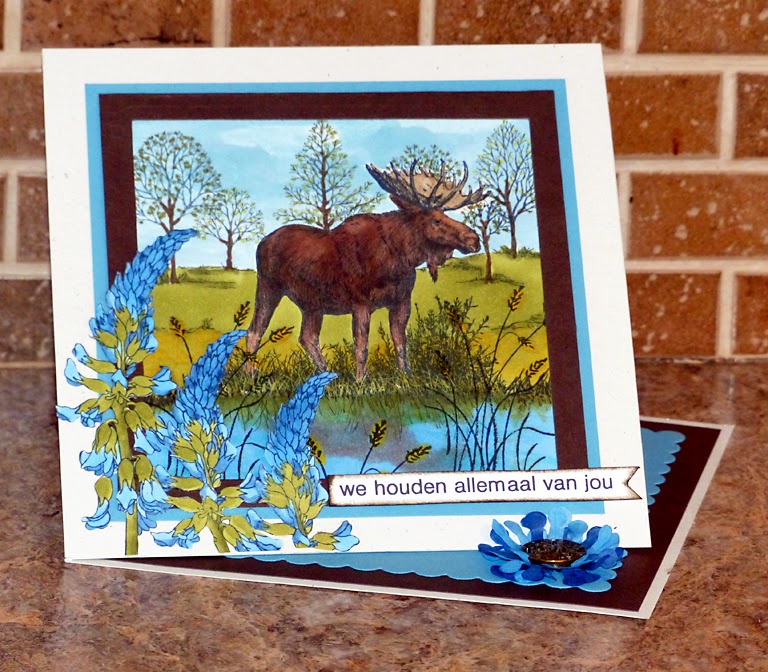 I love the finished card.  There is a rectangle of Whisper White on the inside for writing but I kept it small enough that when the easel is open, only the card shows.

Because it's what I do, I decided to enter the card into a challenge.  It really is a lovely card and deserves some showing.  The Fab 'n' Funky Challenges is having a "Walk on the Wild Side" this week and what could be more perfect than that?

And then I discovered that the City Crafter Challenge Blog is having an "animal magic" week so all cards must feature animals.  What perfect timing!

And last of all, I'm entering the Friday Mashup sketch challenge: 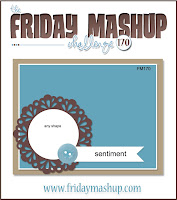