The Wacky Watercooler August 2016 Blog Hop -- Stepping it Up: One, Two, Three!

Welcome to our August Blog Hop.  This month we're trying something we have never tried before.  You've heard of "stepping it up", right?  You begin with something simple, then step it up with some additional decorations, and finally step it up with dazzling details.  That's what we decided to do this month.  Expect to be surprised at how much a card can be changed.

As you will remember, if you've wandered through our blog hops before, our blog hop is presented in a circular fashion.  What does that mean?  Wherever you begin in our blog hop, whether you go forwards or backwards through the participants, eventually you will wind up precisely where you began.  I hope you'll take time to visit all the participating blogs and, perhaps, leave a short message letting us know  what you've thought of our posts.


If you've been moving forwards through the blog hop, you'll have arrived here from the very talented Fiona Whitehead.  Fiona has joined our group for the very first time this month.  She lives in England and has been quite regular in participating in our Watercooler Wednesday Challenge.  I'm sure you were delighted with her projects.  Weren't they terrific?

My first project could easily be considered "simply stamping".  I've used the new Cookie-Cutter Christmas stamp set for the images and sentiment.  This is a perfect project for someone just coming into the stamping world with little more at their disposal than stamps, ink and cardstock.  Even kept simple, however, a card can be a showpiece.  For mine I've used the Heavy Whisper White as my base and  then stamped the image of the little bear on a much smaller piece of Whisper White.  I cut the piece to 2 3/8" x 3 3/4" and stamped the bear slightly high but centred.  This way I was able to stamp the sentiment using Real Red underneath the bear. 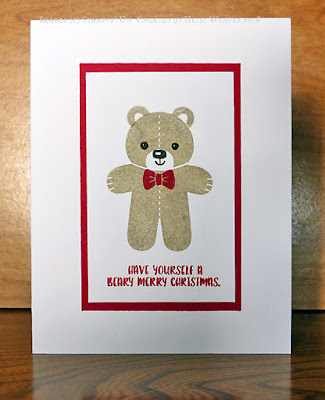 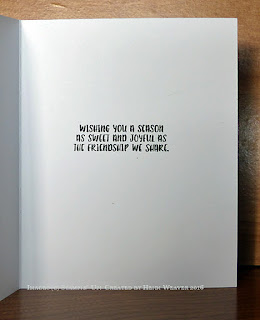 To help the stamped piece of Whisper White stand out and to add more interest to the card, I've mounted it on a 2 5/8" x 4" piece of Real Red cardstock.  It's a simple card that anyone would be proud to make or happy to receive.

For my second project I stepped it up by adding a variety of designs from the Candy Cane Lane Designer Series paper.  I chose to keep the same layout and, besides the simple stamping which I did for the initial card, I used my Stampin' Trimmer to cut a variety of sizes of cardstock and Designer paper to dress up the card.  Instead of leaving the large white frame around my image, for example, I've added a layer of Early Espresso before attaching a background of candy canes and white frosting flourishes.  I've added a "girdle" of diagonal stripes backed with Crumb Cake cardstock.

My centre image is stamped on a piece of Whisper White as before but this time I've mounted it on a wider piece of Real Red cardstock and have added a strip of Designer paper to the left side.  Once that was all stamped and assembled, I used Dimensionals to add it to the card. 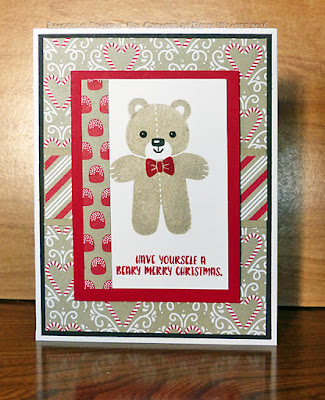 For the inside of my card I added a strip of diagonal striped Designer paper to the top and bottom before stamping a sentiment from the Wondrous Wreath stamp set. using Early Espresso.  I'm sure you'll agree that this card, although basically the same design, is quite a step up from the original card. 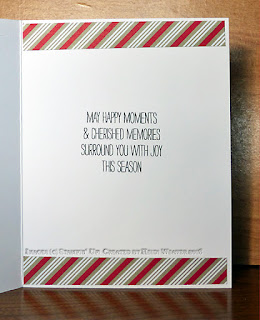 For my third project I went all out.  I used the same little bear image and sentiment as I did on the previous cards and maintained the same colour palette.  That's where the similarities end.

I began with a base of Heavy Whisper White onto which I added a piece of Real Red.  Then I cut a slightly smaller piece of parquet-style wood image from the Serene Scenery Designer Series paper stack.  It was perfect since the colours in the piece were various shades of Crumb Cake.  I used the round-cornered rectangle from the Project Life Cards & Labels framelits to cut out a section, slightly offset from the centre.  Then I lightly sponged the opening with Early Espresso ink to make it stand out.  Before adding it to the Real Red matte, I cut a piece of Whisper White which I embossed using the Softly Falling embossing folder.  I made sure the embossed piece was centred in the rectangular cut-out when I attached the pieces to the card.

I stamped my bear as usual on a piece of Whisper White and then used the Cookie Cutter Builder punch to cut him out.  I also cut out two little white hearts and a Red Glimmer paper bow tie using the same punch.  Of course I wanted to use some of the Candy Cane Lane Designer Series paper and so I fussy-cut out one of the adorable gingerbread houses.  Once I mounted the bear and house on the embossed Whisper White using Dimensionals, the card already began looking more festive.

Using the same punch, I cut out ten little Red Glimmer paper hearts and glued them along the wider right hand side of the Designer Paper.  Then I used the Number of Years stamp set and, on a scrap of Whisper White, stamped the banner using Real Red ink.  Carefully centring it, I added the same sentiment I had used on the previous cards using Early Espresso.  After using the banner framelit from the Large Numbers framelits to cut the banner, I gently sponged around the perimeter using Early Espresso ink.  I used Dimensionals to add the banner to the card as well. 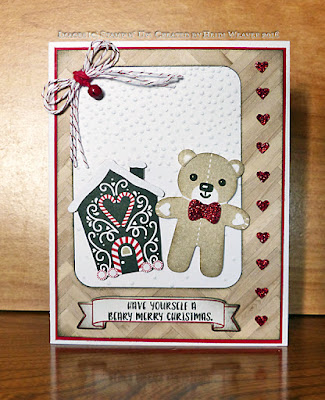 To finish up the front of the card I took several lengths of the Whisper White with red metallic thread Candy Cane Lane Baker's Twine and tied them into a bow.  Then I took a length of the Real Red Baker's Twine and threaded a mini red Jingle Bell onto it before gluing it around the centre of the bow.  Using glue dots, I adhered the bow to the upper left corner of the rounded rectangle.  If you look closely, you'll see that I also went over all the white in the gingerbread house with the clear Wink of Stella. 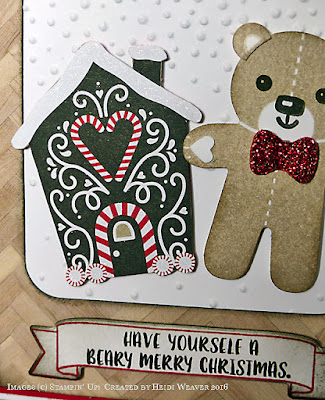 The inside of the card is stamped first with the star flourish from the Star of Light stamp set using Crumb Cake ink and then stamped with a sentiment from that set using Early Espresso.  To enhance the star flourish and add a bit of dazzle, I added the clear Wink of Stella to the larger stars. 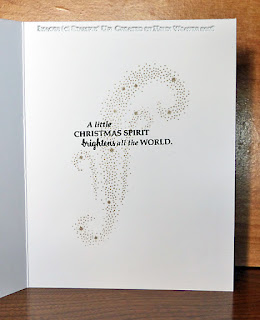 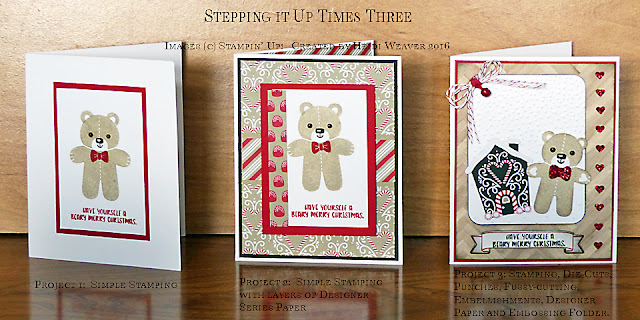 And that's it for my projects.  I hope you've enjoyed them as much as I enjoyed creating them.  From here you'll be visiting another wonderfully creative stamper, Penny Hanuszak.

I've also added my last card to the Merry Monday Christmas Challenge since it was such fun to create.
Posted by Heidi Weaver at Thursday, August 18, 2016