Clean and Simple -- A Child's Birthday

That new stamp set, Boys Will Be Boys, is simply wonderfully versatile.  I've already designed three completely different cards with it and haven't had it for much more than a month.  It's funny how a stamp set can have so much appeal at times and keep on giving you inspiration, isn't it?

Two challenges came along, both asking for CAS (clean and simple) designs.  That could be interpreted as being a single layer card or a very simple multi-layer card.  What you don't want to see is all sorts of embellishments and "frou-frous".  I kept my card to a single layer design with a background of several colours of cardstock frames.

My base cardstock is Cherry Cobbler with a skinny layer of Daffodil Delight and another skinny layer of Pacific Point.  I wanted the colour but not a wide "frame" of each.  What I wanted to focus the most attention on was the stamped Whisper White layer.  For that I first stamped the little robot and then the Lego pieces just below it to the right.  I only inked one piece of the Lego stamp in order to get the one Lego lying just below the robot to the left.  From the Sketched Birthday stamp set, I took the balloon stamp and carefully stamped it to the left of the robot.  Then I extended the "string" with a black marker so that it appeared to be held by the robot.  I also used the marker to draw in floor lines on either side of the robot.

All the colouring was done with Blendabilities except for the floor which I gave a colour wash with my Aqua Painter and some Pistachio Pudding ink.  It's a clean and simple one-layer card which I think any child would be thrilled to receive. 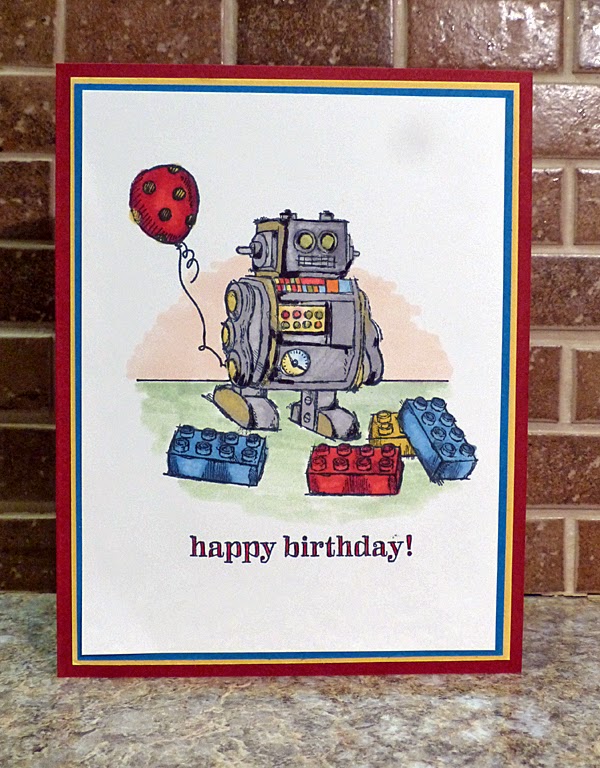 For more clean and simple cards, check out The Paper Players whose theme is "A Child's Birthday".

For more clean and simple cards where anything goes, check out Addicted to Stamps and More.

And finally I added this card to the East Wind Challenge Blog.
Posted by Heidi Weaver at Wednesday, August 20, 2014