I was picked for "A Cut Above" and received a badge for this card.  So exciting! 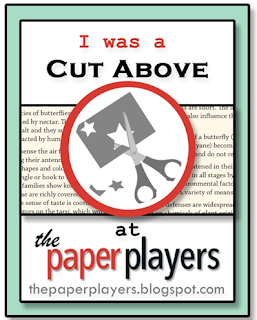 I discovered the Paper Players just in time.  They're having their 200th challenge and so they've brought out some of their previous challenges again.  I chose to do PP61 just because it fits in nicely with the Wetlands stamp set marathon I seem to be on.  It just goes to show how many different looks you can get with the one stamp set.  This is the challenge sketch. 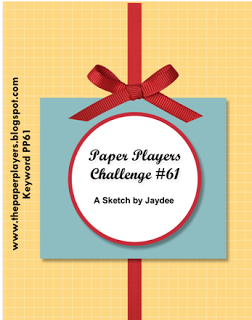 I chose to do the sketch sideways.  I've been doing so many vertical cards that it felt right doing this one horizontally.  I used the Lost Lagoon cardstock as my base and from there built up with a layer of Naturals White and then a layer of the Baked Brown Sugar pattern from the In-Color Designer Stack.  Then I added layered rectangles, first Naturals White and then Baked Brown Sugar which I ran through the Big Shot in my  Woodgrain embossing folder.  Then I mounted a set of three circles on dimensionals.  The centre circle of Whisper White was stamped first with one of the Work of Art stamps and then with the stamp from Wetlands.

The ribbon is the new In-Color Lost Lagoon Stitched Satin Ribbon and has a cluster of threads from the Burlap Ribbon tied inside.  Finally, I stamped "just for you" from the Teeny Tiny Wishes on two lines and then cut it out using the little Banner punch. 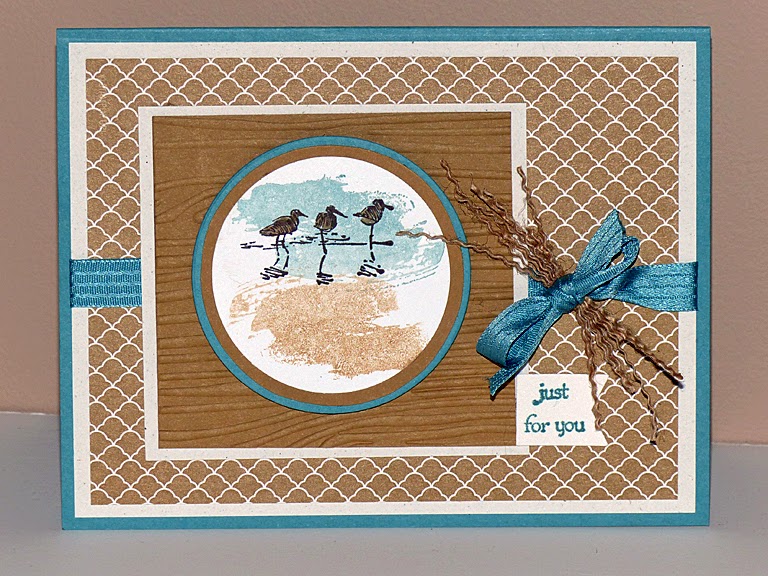 If you want to see more of the creations made for the 200th Celebration Challenge, just pop on over to the Paper Players.
Posted by Heidi Weaver at Wednesday, June 18, 2014