It's Gail Allen's turn to host at our Watercooler Wednesday Challenge this week and her challenge is "All About Birthdays".  Such fun!  I love creating birthday cards and this leaves it open for any style at all. 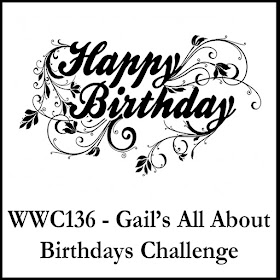 In creating my card, I had so many different ideas that in the end it just grew like "Topsy".  I tried a couple of different techniques, used some brand new Designer Paper, and decided to make it a Gate-Fold design.  The finished results?  I'll leave that judgement up to you.

I began with a 4 1/4" x 11" piece of the Heavy Very Vanilla cardstock, making score lines at 2 3/4" and 8 1/4".  To each side of the front I added  a layer of Early Espresso and then a layer of the Painted Autumn Designer Series paper.  (Don't those sun flowers look bright and cheery?)

For the overlap, to close the gate-fold, I first cut a layer of Early Espresso with the largest of my Stitched Circle framelits.  Then I cut a layer of Soft Sky using the next size down.  To give the illusion of ripples and also to pull all the colours together, I cut a piece of the leafy swirl from the Garden Green cardstock and from the Lemon Lime Twist cardstock using the Swirly Scribbles thinlets.  Once I overlapped them and attached the four die-cuts together, I had a great place for my dragonfly to land. 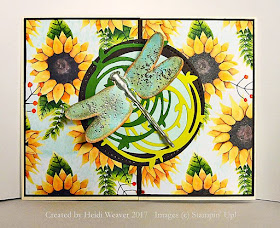 Now let's talk about my dragonfly.  That was the result of a whole lot of experimenting and playing around.  First of all I had been trying out some Oxide inks on Whisper White.  I thought the results were very similar to some of the background portions of the DSP and so used the Detailed Dragonfly thinlets to cuts out a dragonfly.  I had also been oohing and aahing over the wonderful hot glue/metallic embossing which I saw on some Pinterest samples and so decided to try that out for my dragonfly's body.  First I ran hot glue along the body, trying to keep the amount of hot glue controlled to create the correct form.  While that was still warm, I sprinkled it with Silver Embossing powder, which stuck nicely to the warm glue.  Then I used my heat gun to completely melt that embossing powder and wound up with what looks like a real metal, 3-D dragonfly body.  I was totally stoked!

To finish off the wings, I sponged around the perimeter using Crushed Curry ink and then stamped the wings with Versamark using the lacy image from the Touches of Texture set and heat embossed that with Silver Embossing powder. 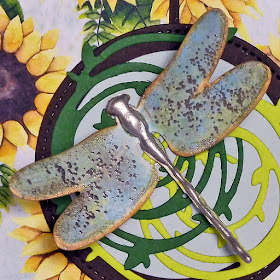 For the inside of the card I kept to the dragonfly theme.  I had created a background using several of my SU! inks and trying out the salt technique.  I wan't happy with it but put it aside "just in case".  Well it worked perfectly for this card.  I began by adding a layer of Early Espresso to my card and then added the background layer.  To that I added circles cut from Whisper White and Garden Green cardstocks using the various sizes of my Stitched Circle framelits.  After stamping my sentiments on the circles, I added silver foil dragonflies and hearts. 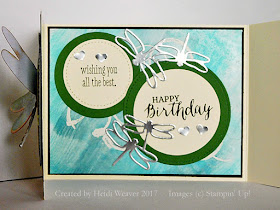 I hope you'll check out the other creations by our talented Watercooler Artists at the Watercooler Wednesday Challenge.

I've also entered my card into the Global Design Project 104.  Having used the sketch but changed it to a gate-fold, I think it still meets the criteria.
Heidi Weaver at Wednesday, September 13, 2017
Share